In a time of political strife and economic weakness, Württemberg’s King Wilhelm I and his wife Katharina laid the foundations for what today has become known as the Cannstatter Volksfest by forming the “Centralstelle des landwirtschaftlichen Vereins” – an agricultural organisation – in 1817. An agricultural festival with horse races, prizes for outstanding achievements in livestock breeding combined with a people’s festival was, in accordance with the king’s wishes, designed to revive Württemberg’s economy after the damage done to it during the Napoleonic wars.

Everything was then prepared for 28 September, one day after the king’s birthday, in the following year. The original Cannstatter Wasen site has been the venue for the major festival ever since 1818. At the time it was an idyllic though watery meadow on the banks of the River Neckar which was yet to be dammed up. Lying between green fields and vineyards and without any surrounding buildings, the Wasen, as the site is called by the locals, lay within view of the royal Villa Bellevue close to the Wilhelma, the only combined zoo and botanical garden in Germany. It was therefore only a short horse-drawn carriage ride away for the festival’s benefactor who had no intention of missing the ceremonial opening and witnessing the successful start. The original idea of the “king amongst farmers and the farmer amongst kings”, as Wilhelm I was called by his contemporaries, continues today in the shape of the so-called “Landwirtschaftlichen Hauptfest”, a large agricultural show running parallel to the Volksfest that showcases all the latest technology within the farming industry in the state of Baden Württemberg.

There have almost always been parades through the streets of Stuttgart to the Volksfest on the Cannstatter Wasen. Reports dating back to 1841 tell of a festival parade with over 10,000 participants and well over 100,000 people lining the streets. At the time, the town had a population of barely 40,000. The Volksfest parade in today’s sense with its official start at the Cannstatter Kursaal was held for the first time in 1927. As befitting the home town of Gottlieb Daimler and Wilhelm Maybach, the first motorcade took place in 1911.

Initially there were only very few funfair attractions and stalls selling beer. They were also all confined to the edge of the actual site in favour of the royal box and the stand for dignitaries. In 1860 the “Amts- und Intelligenzblatt für das Oberamt Cannstatt” (The Official and Intelligence Journal for the District Authority of Cannstatt) wrote of a scene similar to the one today in that the stalls were for the first time “arranged in three main streets and numerous side streets”.

On the instructions of King Karl I, son and successor to Wilhelm I, the Cannstatter Volksfest was no longer held annually but biannually from 1882 until the death of the king in 1891. It and the effects of the two World Wars have led to there being a total of 28 years in which there was no Volksfest.

Baden Württemberg’s largest festival a big attraction from the start

The Cannstatter Volksfest has continued to grow over the decades and has successfully combined tradition with modernity in an appealing and unique way. Baden Württemberg’s largest festival attracts approximately four million visitors every year. In the early years, the number of people involved in the festival was significantly higher than the joint population of Stuttgart and Cannstatt. According to contemporary records, more than 30,000 participants and guests were present at the festival right from the start in 1818. Some even had to endure several day journeys from all parts of the kingdom. When remembering that the first Cannstatter Volksfest only lasted a single day, namely on the 28 September 1818, the number of visitors is comparable with the daily figures today. The Cannstatter Volksfest was therefore a major attraction at the very beginning and it has stayed that way right up until the present day.

The present Cannstatter Volksfest lasts longer than it has ever done before in the past. In the 19th century, there was only a single day of festivities, a little later there were three, then four and from the end of the 1920s five festival days. After the Second World War, people were able to celebrate on ten days, then twelve and since 1972 sixteen. The Volksfest has lasted 17 days since 2007 when the official opening on Saturday was brought forward to Friday.

The “Fruchtsäule” (Fruit Column) is the emblem of the Cannstatter Volksfest. There has been a towering column decorated with many different kinds of fruit, cereals and vegetables ever since the first Volksfest in 1818. Today the symbol reminds one of the origins of the Volksfest, namely the agricultural festival. Commissioned and funded by King Wilhelm I, the frist fruit column was designed and built by the architect to the royal court, Nikolaus Friedrich von Thouret, the money for the first fruit column was funded by King Wilhelm I.

After the First World War it was seen as being a “monarchistic relic” due to its origins and royal blue colour and was not erected for a number of years. The tradition was then revived for the 100th Volksfest in 1935 and it has adorned the festival site every year since. Built in 1972, the diameter, height and colour of the present fruit column replicate the original version. Twenty-six metres high, it is mounted on a five-metre high base and weighs about three tons. The dish holding the fruit and plant decoration at the top weighs approximately an additional 600 kilos. The outer part of the column is made of wood and inside is a steel construction.

The fruit column’s appearance has changed many times over the course of the decades. Up to 1995 it was dismantled and stored at the end of each Volksfest. In the following years it remained by way of trial on the Wasen so that it could be seen each year during the Stuttgart Spring Festival. Since the past few years only the top has been removed so that the base, which supports the Cannstatter Jug during the Spring Festival, remains standing. 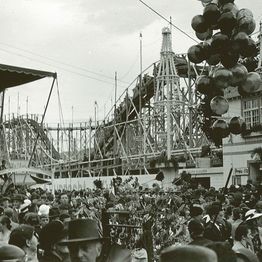 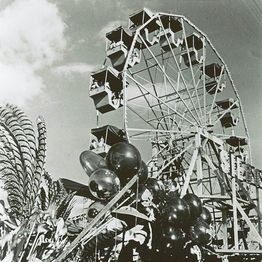 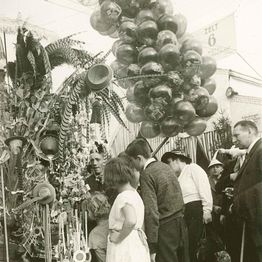